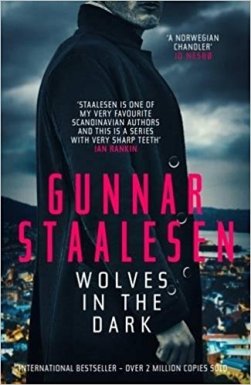 Wolves in the Dark

PI Varg Veum fights for his reputation, his freedom and his life, when child pornography is found on his computer and he is arrested and jailed. Worse still, his memory is a blank…

Reeling from the death of his great love, Karin, Varg Veum’s life has descended into a self-destructive spiral of alcohol, lust, grief and blackouts.

When traces of child pornography are found on his computer, he’s accused of being part of a paedophile ring and thrown into a prison cell. There, he struggles to sift through his past to work out who is responsible for planting the material… and who is seeking the ultimate revenge.

When a chance to escape presents itself, Varg finds himself on the run in his hometown of Bergen. With the clock ticking and the police on his tail, Varg takes on his hardest – and most personal – case yet.

Chilling, shocking and exceptionally gripping, Wolves in the Dark reaffirms Gunnar Staalesen as one of the world’s foremost thriller writers.

Gunnar Staalesen is a Norwegian crime writer who has written over 20 books. Ian Rankin writes of him as being the Norwegian Jo nesbo. His most popular are the ones about the private investigator Varg Veum. Wolves in the Dark is the latest Varg Veum novel.

The book starts off with Veum being arrested because indecent images have been found on his computer. Whilst being held in prison, Veum tries to remember who from his past would have such a grudge against him to give them enough reason to plant the images and see him convicted.

Unfortunately his memories are hazy to say the least, as he has spent the last four years in a drunken stupor, grieving the death of his girlfriend.

This is the first book I have read by Gunnar Staalesen and I enjoyed the tightly plotted style that kept the tension high and the pages turning.

The character of Varg Veum is really interesting. He is a complex man with a difficult backstory whose life has hit rock bottom. I really enjoyed his character; a good man but flawed. I will definitely go back to read the other books in the series to find out how he got to where he is.

This is a hard-hitting, dark thriller with difficult subject matter that is very well handled. It is a well-paced thriller with excellent dialogue and the short chapters keep the pages turning long into the night.

If you like your thrillers dark and intense with a hard-boiled protagonist, Wolves in the Dark will definitely appeal.

Don’t forget to follow the rest of the blog tour! 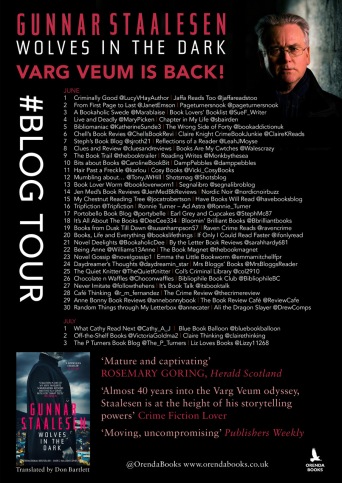 Many thanks to Orenda Books and Anne Cater for asking me to be part of the blog tour and for sending me a copy of the book.

Book Reviewer, Avid Reader and Bookworm. Campaigning to link more readers to writers. People do not forget books that touch them or excite them—they recommend them.

Reviews and ramblings from my pages...

Discovering Romance One Book at a Time.

Books, travel, and other things that make life interesting

Book Reviews and Other Bookish Things

'just a nobody with a blog'